I can pinpoint four specific miracles that took place during our visit to Armenia. The first was upon arrival, two during our road trip away from the big city, and the fourth was the day before departing. Each was something beyond our control where we felt very cared for by El Roi, Hebrew name for God meaning “God Who Sees Me”. (Can you tell I have been staying in Israel for a while?!?)

Miracle #1: When Mom and LeeAnn arrived in Yerevan, I rode with the hotel shuttle driver to pick them up at the airport. While we hugged, the driver took the full luggage cart to load them in the vehicle. Assuming all the bags were in the van, we piled in and took off on the twenty minute ride to the hotel. After the bags were unloaded on the curb, we were not able to locate Mom’s Canon SLR camera bag. Panic set in. You know the feeling – that one where your heart is in your stomach?  After calling the airport to report it missing, we find out the local police have jurisdiction over the parking garage. So we call the police. After only a few minutes on the phone they report back that it had been found. With Mom still on the line they went through each pocket to make sure everything was accounted for. The bag was delivered to the hotel the following day with all items in tact. Thank you El Roi for seeing our circumstance before we knew we had one and providing.

When we left Goris, the fog was still lingering. We debated whether to attempt the Tatev Monastery or to leave the eastern part of Armenia to head northwest toward our next destination near Lake Sevan. One of the most exciting parts of visiting Tatev is taking the LONG aerial tram ride to the mountaintop monastery. The views of the valley below are incredible from seeing farms to winding mountain roads to ruins of once-upon-a-time villages. From my experience in 2015, even if the ride was all fog, Tatev Monastery is pretty unique on its own.  I suggested we still do the ride because the fog could open up to see the valley below.

Miracle #2: The fog opened up to see the valley below. As we boarded the “longest reversible cableway (aerial tramway) in the world” and pulled away from the edge of the mountain, the fog seemingly disappeared. The entire fall landscape below was clear as a bell for the full twelve minute ride to Tatev Monastery. Thank you El Roi for seeing our adventurous hearts and providing a clear, beautiful view when it looked clouded. 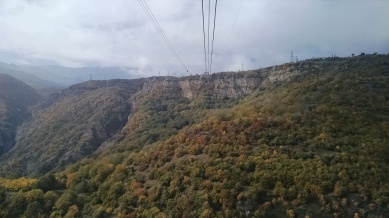 Originally built during the 9th century, Tatev Monastery is one of the oldest spiritual centers in Armenia. It also was home to University of Tatev during medieval Armenia in the 14th and 15th centuries. This University is most noted for its role in the advancement of Armenian culture and served as a library for valuable manuscripts, monastic and official documents and contracts. The school was varied in offering studies from sciences to language to music to art. At some point, an olive mill was added to 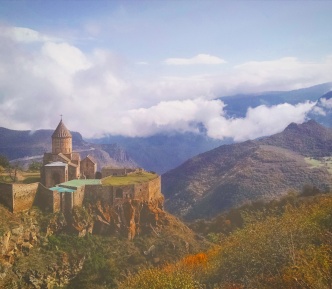 the monastery. Elements of the mill are still well preserved today. The buildings have undergone much destruction and reconstruction over the centuries due to invasions, natural disasters and even looters but the magnificence of this place still remains. It sits high on a cliff overlooking the gorge of the Vorotan River. Even though it is only used for tourism now, as I stood in the courtyard breathing in the structures on the property, I was able to imagine the hub of activity it once was. Tatev really is a sight to behold as she stands proud of her legacy like a castle in the clouds. 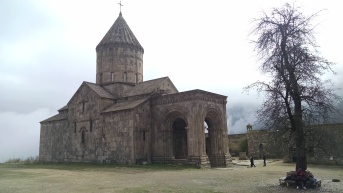 Outside view of Tatev Monastery 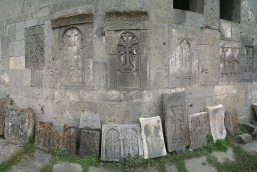 As we boarded the tramway again to head back, the fog came rolling back thick as can be. How blessed we were to have the exact amount of time needed to view this spectacular place.

Remember in my previous blog I mentioned how vehicles are not the only ones who use the roads? We had taste of sharing the foggy road with some fluffy friends…

We drove along winding roads once again heading northwest toward Lake Sevan. At this point, we were planning on hanging out near Lake Sevan for a couple of nights but only had accommodations for one evening. We wanted to be free to venture into other surrounding areas without being tied down to one general location.

Lake Sevan is the 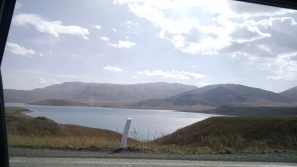 largest body of water in Armenia measuring twenty miles wide and over forty-five miles long. It is also one of the largest high-altitude lakes in Eurasia sitting at a whopping 6,234ft above sea level! And let me tell you, while you area driving next to it, it just keeps going and going and going. The lake is considered a “national treasure” by providing electricity, fish and tourism to Armenia’s economy. As with most areas of Armenia, the history of Lake Sevan can be traced further back than most Americans can fathom with proof in the old black monastery which is situated on a peninsula overlooking the water. Since Lake Sevan boasts the only beaches in Armenia, it is a popular vacation spot for Armenians during the warm months.

Our accommodations for the evening were in the town of Tsaghkadzor. Please do not ask me how to pronounce this town name, I have no idea. We had previously scoured the internet looking for places to stay and this particular lodge had really good ratings and reviews AND the price was reasonable. So we booked online and away we went. By the time we reached the downhill ski town of Tsaghkadzor, the sun had gone down and the time was approaching 7:00pm. The entire town appeared to be sleeping already – no restaurants open, no shop lights on, no hotel rooms with lights on…it was a bit eerie. When we arrived at our booked lodge, it appeared to be completely closed. No lights. No activity. LeeAnn climbed the fifteen steep steps to the door and found a lone security guard with limited English waiting for us…only the overhead security lights were on. He led us up SIX long flights of stairs in the silent darkness to the very top floor where he unlocked two room doors, each having rather shabby accommodations with two single beds. He nodded his head as a bid goodnight and walked away. We still think we were the only guests in the place for the twenty minutes we were there. After being creeped out, we decided we needed to find a different place to stay. We grabbed our bags and went back down the SIX long flights of stairs in the dark. I mean, come on, this is the stuff horror movies are made of! Not a soul was around in the dim lobby area so we left the key on the desk and quickly went to the vehicle. As we pulled out of the parking lot, the security guard came running up to the vehicle. I rolled down the window and simply said, “No, not comfortable.” He looked disappointed but hey, what could he do? Luckily we had not supplied a credit card online or during this rather peculiar “check-in”. We jumped online once more (thank goodness for car rentals offering Wi-Fi!) and looked for other accommodations. We checked into a couple of places but NONE of them were open.

Miracle #3: In the distance we saw a large, lighted sign with the words “RUSSIA HOTEL”. We figured if the signs were lit up, someone should be home, right? When we pulled up to the hotel, a few lobby lights were on. An actual person was working the front desk! We asked if they were taking guests for the evening and the desk clerk said “Yes.” We asked if the hotel had a restaurant on site and the desk clerks said, “Yes but it is closed now.” Mind you, it was only 8:00pm. We thanked her, went to our room and decided to just get by with protein bars. A few moments later came a knock on the door. The desk clerk let us know that the chef was willing to keep the restaurant open for us to eat. He was currently preparing some food for us. How amazing is that?!? The three of us dined alone in a huge dining room, feeling awkwardly cared for. Thank you El Roi for seeing our need for a place to stay and providing not just shelter but food as well.

See LeeAnn and Mom in the far left corner?

We have the dining room to ourselves!

The following morning, we decided to head back toward the big city of Yerevan. With plenty of time for more adventure along the way, we went off the beaten path, up through a couple small villages to find another monastery at the top of a mountain. We found a small souvenir market along the shores of Lake Sevan and made time to swing by a winery. It was a wonderful time to meander our way back with no real agenda but to just experience what we could. 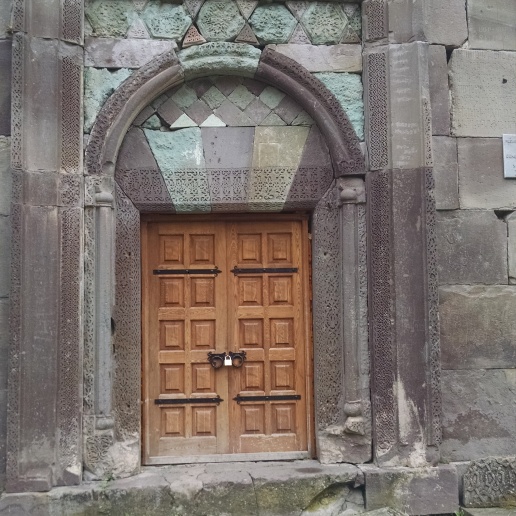 Along the shores of Lake Sevan

Miracle #4: For the majority of our time in Yerevan, Mount Ararat was shrouded by clouds. We could see bits and pieces of the mountain but not a full view of the splendor that she is. I just knew that we would be given one moment to gaze upon her entirety. How did I know? This had been a deep seeded, generational dream over thirty years in the making. I knew God would be faithful to provide a clear majestic moment for us to see Mount Ararat. On our last day, I went out to the balcony of our hotel to see if the mountain was visible. You know what? It was. The full beauty of Mount Ararat was on display for us to see. It was worth every waiting moment. Thank you El Roi for seeing the deep longing of our hearts to see Mount Ararat and fulfilling a dream established long ago.

I want to say a huge THANK YOU to my dad who worked tirelessly to not only help make this dream happen for my mom but also bless me and my sister by paying for some elements for us. He also assisted with child care so LeeAnn was able to visit Armenia too. Also a huge THANK YOU to my brother-in-law who selflessly picked up a large number of extra work hours to help fund my sister’s dream trip and worked it out with child care so she did not have to worry about it. You two men have touched my heart more than you know.

5 thoughts on “Armenia (The Final Chapter)”