As far as we know, we do not have any relatives living in Armenia. During WWI, many Armenians lost their lives due to the genocide. Others fled, leaving Armenians scattered throughout the world. My great-grandmother’s siblings immigrated to the United States while my great-grandfather’s family spread to South America and other locations.

My great-grandmother lived her early years in the towns of Eskisehir and Azizya (now known as Emirdag) which are located on the west side of Turkey, closer to Istanbul. My great-grandfather’s family was also living in Turkey in the town of Adana. At the time, many Armenians were living in Turkey. They were in daily relationship with the Turks; all under control of the Ottoman Empire. They were even serving in the Turkish military, before and during the war. In order to return to some of our ancestor’s hometowns, we would need to visit Turkey. I am guessing the current towns are nothing like they once were when Armenians were inhabiting them. Needless to say, we were not able to visit any of the areas where our family originated.

With many rural areas of Armenia yet to see, we rented a 4×4 SUV and hit the open road heading east. Months before arriving in Armenia, my mom had researched the terrain and road conditions to determine what kind of vehicle would be appropriate. We were all very happy with her decision. When you decide to visit another country, please look into the road conditions and ask questions before booking a vehicle. We found conflicting information about what we were getting ourselves into. In the end, we decided to cover our bases and reserve a vehicle that could do it all, including some very steep, mountainous climbs.

The landscape of Armenia is covered in extinct volcanoes and mountain ranges. Many of the roads are curvy and often switchback their way at a steep grade. Parts of the drive are not for the faint of heart but each turn rewards visitors with a panoramic view unlike the one before.

Armenia was the first country in the world to adopt Christianity as the national religion. “Monastery hopping” is one of the main highlights of the country. Many of the monasteries are built on a hill or mountainside. Some are still in use and are well-kept, others lie in ruin. All come with a story, a legacy and a beauty all their own.

We set the GPS for Tatev Monastery but agreed we would leave room for spontaneous adventure. W 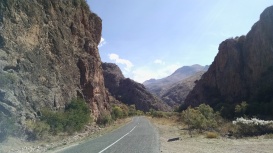 hen we reached the small winery town of Areni, a nature preserve with a cave called to us so we turned off the main road and drove through the high cliffs and foliage. Truth be told, we never found the cave but an old monastery was waiting on top of a cliff area at the end of the preserve road.

Built during the late 1200’s, the remains of the monastery grounds stand as a tourist

attraction and a physical reminder of what once was. Monasteries were used as places of worship as well as hospitality centers, providing overnight accommodations for travelers passing through. Perhaps they were considered the first hostels or guest houses. Monks lived on the premises ministering and taking care of guest needs. Notice: The stairs in the front, on the outside of the structure. This is not a common feature for Armenian monasteries. 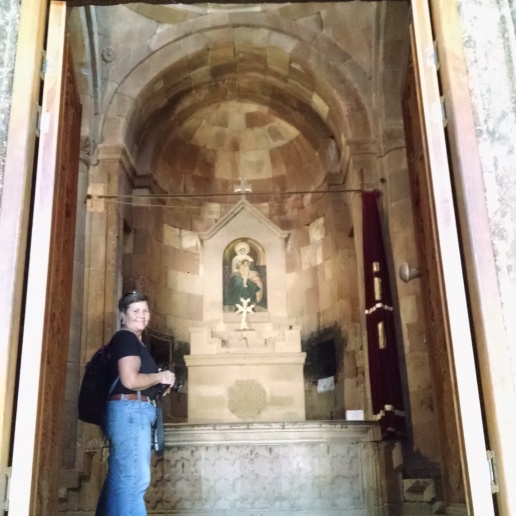 Khachkars (Armenian word pronounced “Kotch-kahrs”) or stone carved crosses, decorate monastery grounds and buildings as well. While their style may look similar to a Celtic cross, they are in fact, quite different. Many of the designs incorporate Armenian living such as pomegranates, grapes, leaves and interwoven lace. Sometimes they have one of the Christian Saint’s faces carved in the stone near the cross. Below the cross carving, most Khachkars have a round design representing a rosette or the sun. They are used for headstones, memorials, church decoration, victory commemorating, jewelry, etc. They are beautifully intricate and can be found all over Armenia. 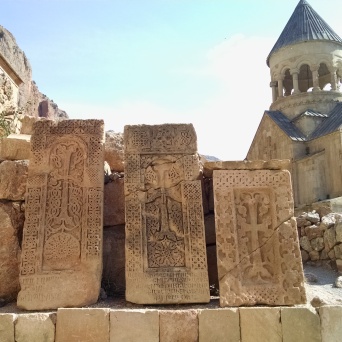 Khachkars carved into the pink building stones of monastery

After we left the nature preserve, we continued heading east toward the Syunik Province to visit Tatev Monastery. As we wound our way there, the fog also wound its way in. I was the lucky one who was driving and at one point, could not see more than a few feet in front of the vehicle. In America, this may not be that big of a deal but in Armenia, not only do we need to keep an eye out for other vehicles but shepherds and farmers also use the road to move their animals. Due to lack of visibility, we somewhat disappointedly decided to skip Tatev for the moment and try again tomorrow. We worked our way to our accommodations in Goris at Aregak B&B. What a delightful surprise this turned out to be.

The care and concern of the host/hostess to make your visit a positive experience is beyond what the normal tourist hotel will offer. The B&B owner, Mariela, lives just above the B&B which turned out to be more like an apartment building. She came rushing down to meet us as soon as we arrived. She was excited to give hugs and welcome us to her home. Her English was strong enough to carry on basic conversation and looked for any way possible to make us comfortable. She brought a welcome snack and suggested we rest for a bit, then she would show us around the town of Goris, including a lavash (Armenian flatbread) factory. We quickly agreed.

Around 8:00pm, Mariela showed up at the door ready to take us out on the town. Actually, Goris was very quiet, very foggy and nearly every business was closed down for the day. But she told us as much information about the town as her English would allow as we made way through the foggy streets to the lavash factory.

I have grown up eating lavash on and off at various Armenian celebrations. To see this flatbread being made was a really neat experience. Three women, a simple area and a lot of work made this visit unique. See the pictures and captions below: 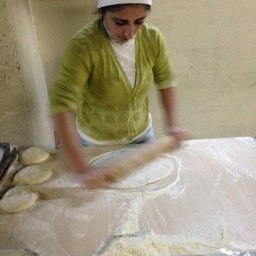 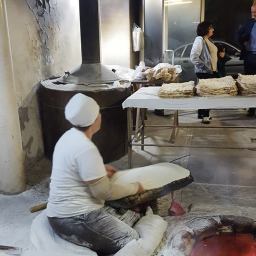 Stacking final product. They will get bundled and packaged for purchase

Mariela had already purchased a few pieces of freshly cooked lavash for us to eat. It was a wonderful surprise. We had debated earlier about whether to go or not because we were so tired but all of us were glad we took the risk for what turned out to be a delightful, unexpected experience.

Following the factory, we walked around the city in the fog to see the local church and landmarks of Goris. This city is mentioned in history books as early as 8th century BC. Over time, as with all ancient cities, Goris was conquered by this king and that empire until it eventually settled in its current status with approximately 20,000 people living along Goris River in the valley. It is currently the second largest city in the Syunik Province.

Mariela took an immediate liking to my mom, especially when she found out we have Armenian heritage. We became family that day. Thank you Mariela for a wonderful stay! 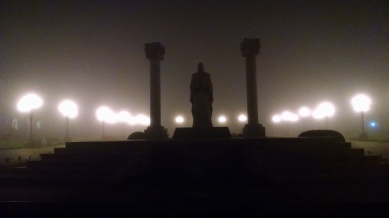 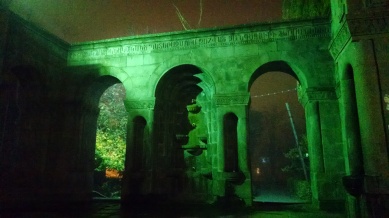 More Armenia to come. I apologize for the recent delays in forthcoming information. Please pray for solid internet access and uninterrupted time to blog. These have been my most difficult hurdles for blogging from my current location in the Negev Desert, Israel.