For simplicity sake, only two species of elephants exist in the world, the Asian elephant and the African elephant. From their classifications, I assume you can guess where each species originates from…either Asia or Africa.

Asian elephants are the smaller of the two species. Proportionally, they also have much smaller ears which are in the shape of a rough triangle with the point facing outward. Also, their skin often has a reddish hue to it. Only the male elephants grow tusks. Asian elephants tend to be more trainable and used for transportation or work like we would use oxen or horses. 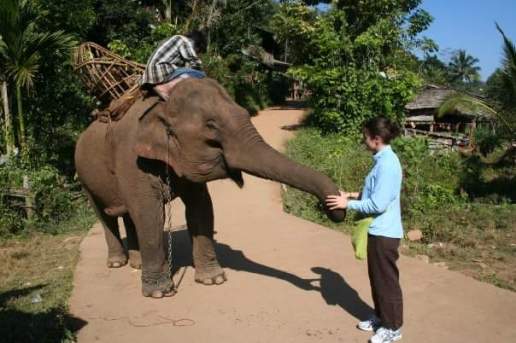 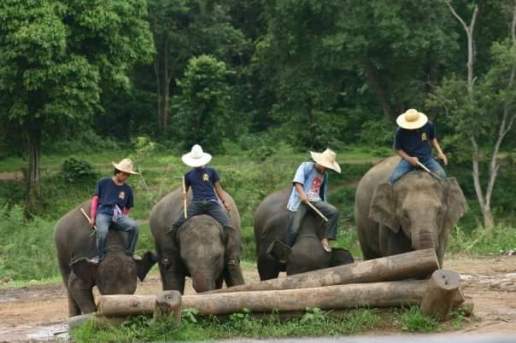 In 2008 I visited Thailand on two separate occasions, six months apart. Each time, I had the opportunity to ride an elephant. The first time was a very tourist oriented facility with platforms to get on the elephant and padded bench seats to sit on as we trudged along well-worn paths. After the ride, the workers gave a demonstration of the amazing abilities the elephant possesses in terms of work, sport and memory. It was a nice introduction to the Asian elephant. My second encounter was through private elephant owners where we went to their village, climbed up the elephant’s shoulder to sit in a bamboo basket and roamed our way through an overgrown jungle. A man walked in front of the elephants swinging a machete to clear the overgrowth from the path. It was such a uniquely different experience from the first! 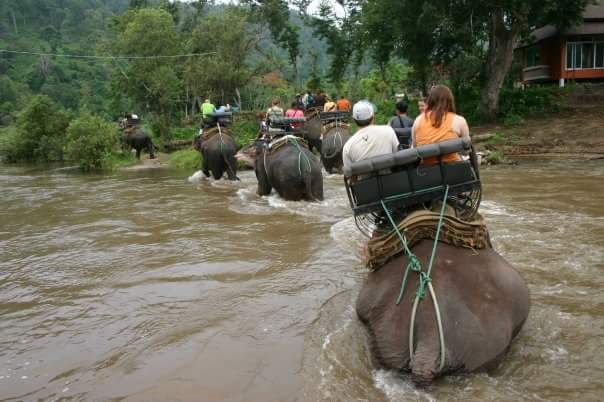 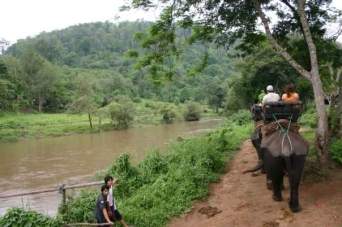 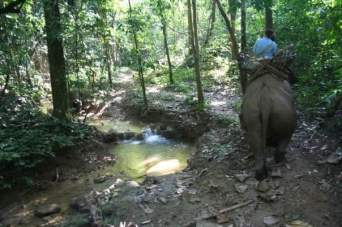 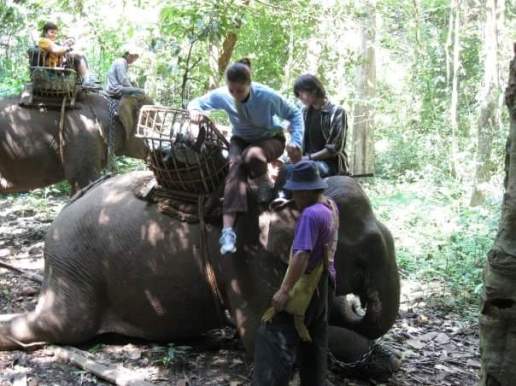 2008 Visit #2: Bamboo basket, climbing down as elephant lays down 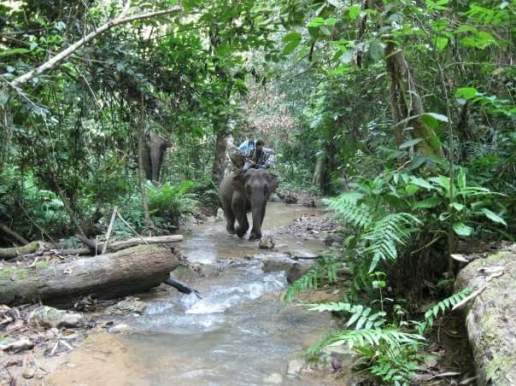 After my Thailand visits, I realized how much I loved elephants. When I thought back over my childhood, I remembered being interested in elephants and owned little elephant figurines. I had always loved elephants but had never realized it! When I learned about the Elephant Sanctuaries in South Africa, it was a “must-do.”

African elephants are different from Asian elephants. Typically they have enormous, dark grey bodies with larger ears, shaped like the continent of Africa. Both male and female elephants grow tusks. They are more temperamental than Asian elephants and are more difficult to domesticate.

The Elephant Sanctuary has three different locations in South Africa. The Sanctuaries provide unwanted elephants who have already been domesticated elsewhere, a healthy and safe place to live. Because they are very social and have already been accustom to human interaction, the Sanctuary can offer a unique experience to curious visitors and satisfy the elephant’s needs. Depending on the visitor’s interest and budget, several experiences are available from “Trunk-in-Hand” (walking the elephant) to being an elephant keeper for a day. I opted to do Trunk-in-Hand and an Elephant Back Ride.

The Elephant Sanctuary in Hazyview, South Africa is the newest of the three facilities and currently houses only two elephants, Kasper and Kitso. Our time started off with seeing the stalls where Kasper and Kitso sleep. They look similar to a horse stall except a much larger space. Nothing too exciting to tell about it.

After the stalls, the guide shared information about the anatomy of the elephant. As we looked at an elephant skull, different holes were pointed out where the tusks would be, the ears and spine. Check out the photo of the elephant diagram, it is fascinating. Elephants only have one stomach unlike cattle which have four different stomach chambers. The heel has a large air pocket which actually pushes the elephant up on its toes, allowing it to walk rather quietly. The end of the trunk has a little “finger” which allows the elephant to pick up the smallest of items like nuts to feed itself. The trunk also inhales dirt or water just to be forcefully blown back out as sun protection or bathing. The tusks are used to fight, dig and even rip bark off trees which is why they vary in length. One tusk is usually shorter than the other based on the elephant’s preference – it is kind of like being left or right-handed. This animal is so incredible. No other animal in existence that has similar anatomy to the elephant! 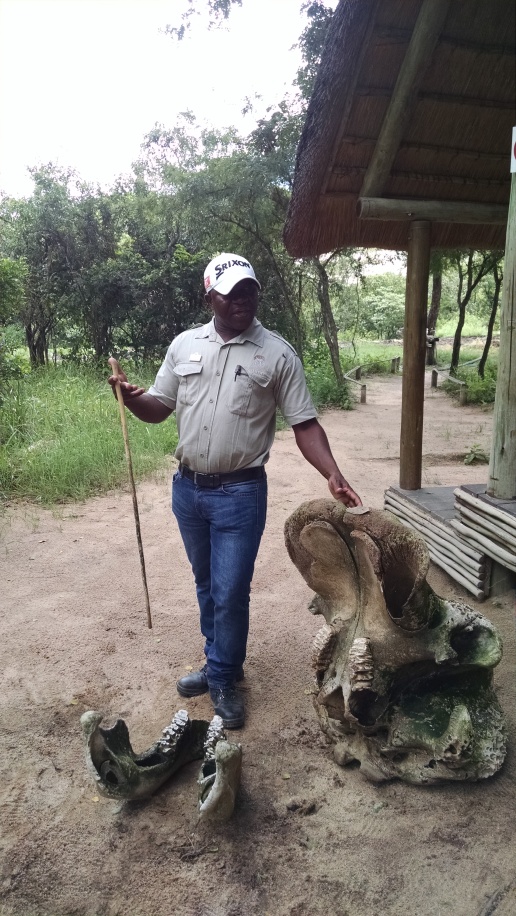 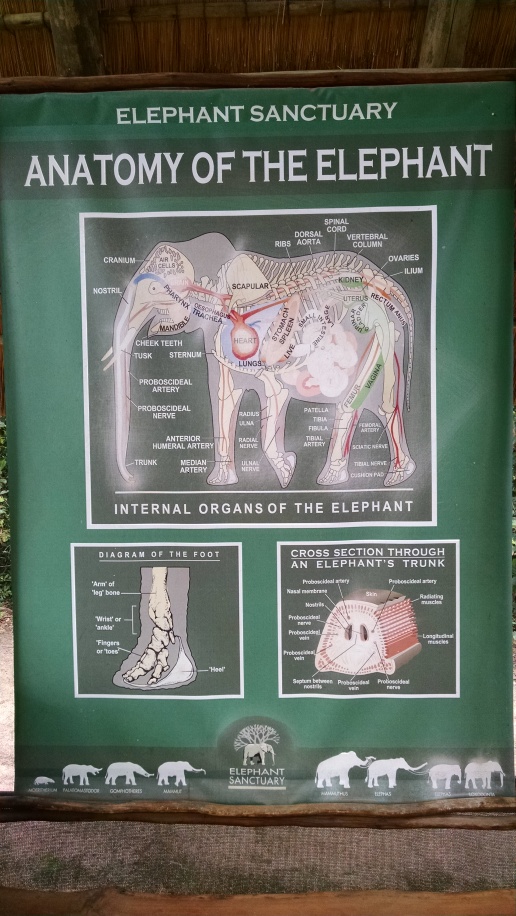 After our classroom phase, we headed to the elephant experience. We were introduced to Kasper and Kitso by being given a large handful of pellets to feed them. As each elephant put his trunk out for the pellets, we were instructed to drop the entire handful in. We were all hesitant to drop so many pellets at one time, I think we were all worried about suffocating them!

Each person took a turn with the elephant keeper and one of the elephants to learn hands-on about them. We were able to touch the rough, one-inch thick skin. We poked the air pocketed heel. We petted the soft belly and grabbed the solid tail. We felt the beautiful, ivory tusks and peeked inside his mouth at the tongue and teeth. At the end of the demonstration, we all received a muddy kiss. Basically, the elephant puts his trunk on you and blows air through it. The trunk was a bit scratchy against the skin. 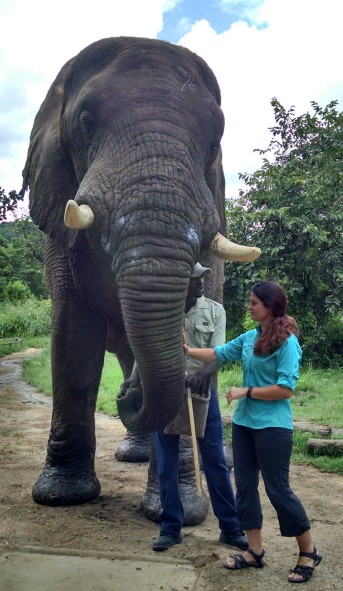 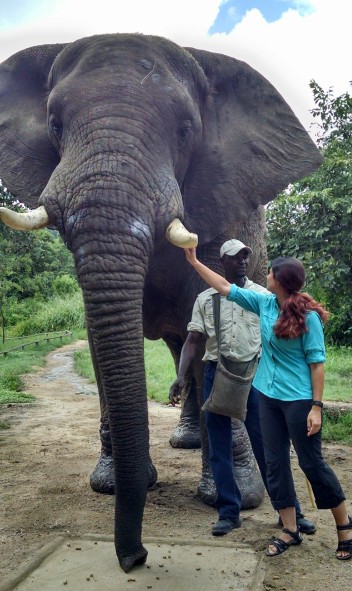 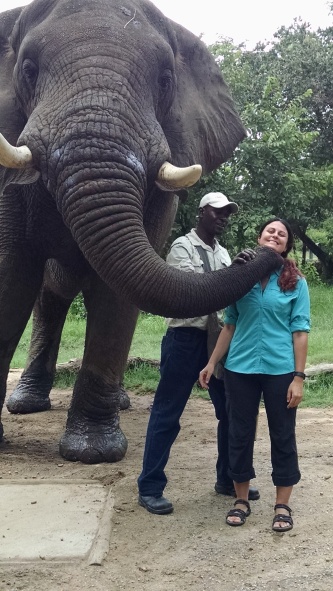 Then, we all had a chance to walk the elephant, “trunk-in-hand.” The walk was not very long but one really feels small when walking a few feet in front of a full size African elephant. The elephant keeper kept telling me I needed to walk faster. While elephants look like they mosey along, it is just an illusion to their size. I had to walk at a much quicker pace than I anticipated. 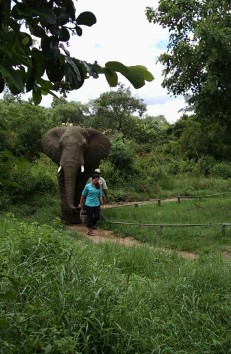 Trunk in hand with Kitso 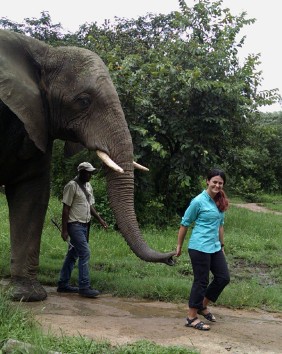 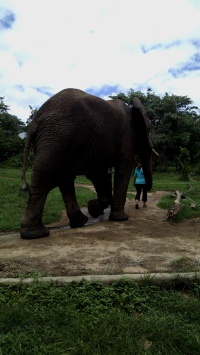 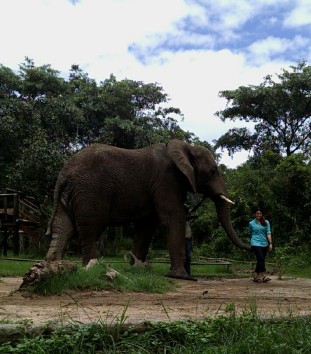 Last but certainly not least, came the elephant rides. We climbed a tower of stairs to board the back of the elephant with the elephant keeper. This experience was far different from the rides in Thailand because it was bareback. I did not have a cushy seat or anything to hold on to. I sat on the elephant’s spine as we went for a ten-minute stroll around the grounds. With each step, I was shifted to the right or the left. I had to hold my body core together to maintain balance giving a great abdominal workout! The ride was fairly uncomfortable so I was okay with only ten minutes. But what an experience.

If you visit South Africa and want to visit one of three locations, click on the website for the Elephant Sanctuary: http://www.elephantsanctuary.co.za/index.htm

Of course other differences exist between the Asian and African elephants so feel free to do some googling if they interest you. Both species are very fascinating in their different biology, behavior and social interaction. Even if you visit a zoo, take note which type of elephant they have; You will start to see the differences quite quickly. 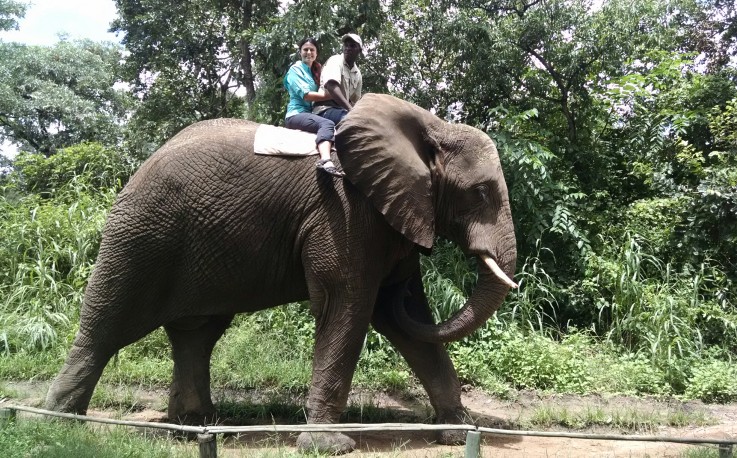 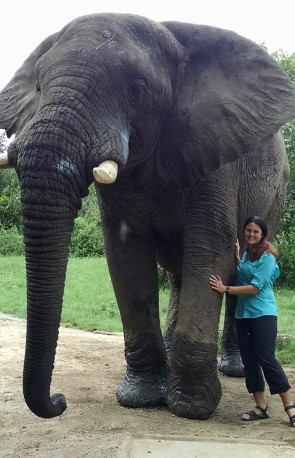