While the Romans did not invent the simple idea of a “road,” they did design a specific system of road planning and layout. (Thank you Sandra for teaching me this!) As the Roman Empire spread by conquering new land, a road was built in a long, straight line leading to Rome. Many engineering tricks like bridges, tunnels and viaducts were used to accomplish this feat. The main road, direct to/from Rome made for easy travel and transport for the public, military and even merchandise or goods. While smaller streets fed to the larger pathway, the old saying was true that in fact, “all roads did lead to Rome.”

How did my road lead to Rome?

I worked my way through six countries in about a month. As fun as it was, it is a TON of decision-making and details to figure out. My mind was constantly spinning to make sure I did not miss anything important. I am finding it takes a lot of research to plan the next step when traveling in this capacity. My goal is be as cost-effective as possible but it takes research to figure out which option is the most cost effective. Also, when I am taking a number of different modes of transportation, how can I link up the timetables effectively? Is the train station near the bus station? If not, how will I get to the bus station? If not, can I walk or is it too far away or do I even have time to walk before the bus leaves? Can I count on my train or bus being on time? All of these questions (and more) have to be considered for each individual leg of the journey. So many details, so many questions, so much research, so many decisions. And while I am sitting at my computer trying to fit the upcoming puzzle together, I am not out enjoying the location I am currently visiting.

I am more of a big picture person so all these intricate details can become a bit wearing for me mentally. After six countries, my mind needed a break. Since I had two weeks until my friend, Lisa, meets up with me in Italy, I decided to just take time in Rome. Plenty of time to see things, relax and work on some of the next journey.

I found a place called Tiber Campground and Hostel. It is located approximately thirty minutes or so, north of the city by train. Many hostels have a maximum stay of  ten nights but this one allowed me to stay for the needed fourteen nights so I did not have to move around. It is a little oasis offering a campground as well as dorms, swimming pool, restaurant, bar, small market, laundry, free Wi-Fi, easy public transportation to the city, etc. 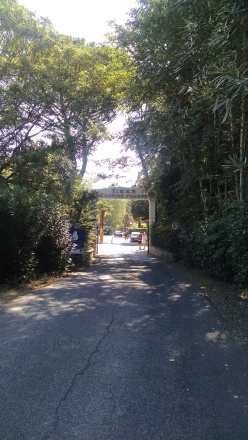 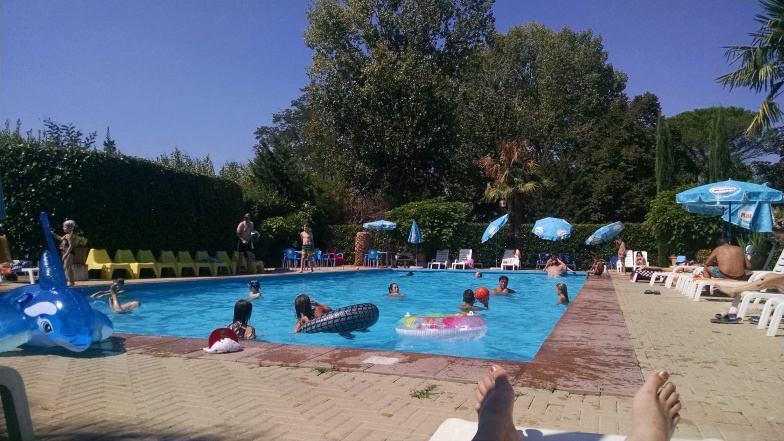 I took the first week to lay low. It wound up being a much-needed time as I got sick with a cold. I wanted to get over it as quickly as possible so I pretty much slept for a couple of days. Now, other than a lingering cough, all is well.

After getting rested, I connected with my friend, Sandra. When I was a tour director to the Tuscany region of Italy last year, Sandra was our fabulous local guide. We have stayed in contact and she was willing to take me all over Rome to show me her beautiful city. I had a wonderful time visiting and learning about a number of piazzas (plazas), monuments, fountains and cathedrals. Sandra is amazing in the amount of information her mind can retain as she shared dates of sites built, names of emperors or kings who built them, why they were built and how they are important to Roman history. Did you know the current city of Rome is actually standing three stories above the original city? As emperor’s and kings took over areas,  they would build their own kingdom to their own liking on top of an already established area. As modern Rome is in the process of adding on to the underground metro, finding ancient city as they dig adds a whole different delay to the construction goals. Amazing! 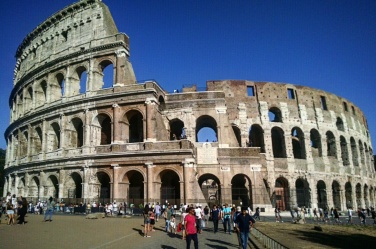 Outside of Roman Colosseum. 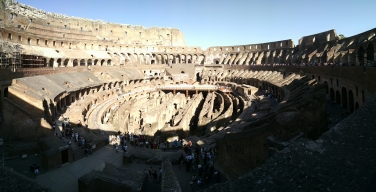 Inside of Roman Colosseum. 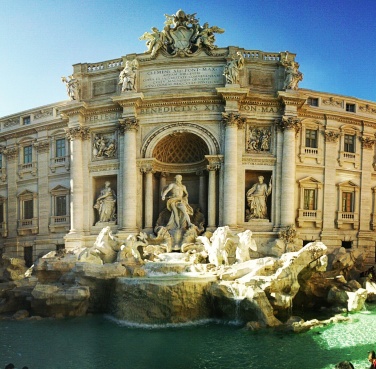 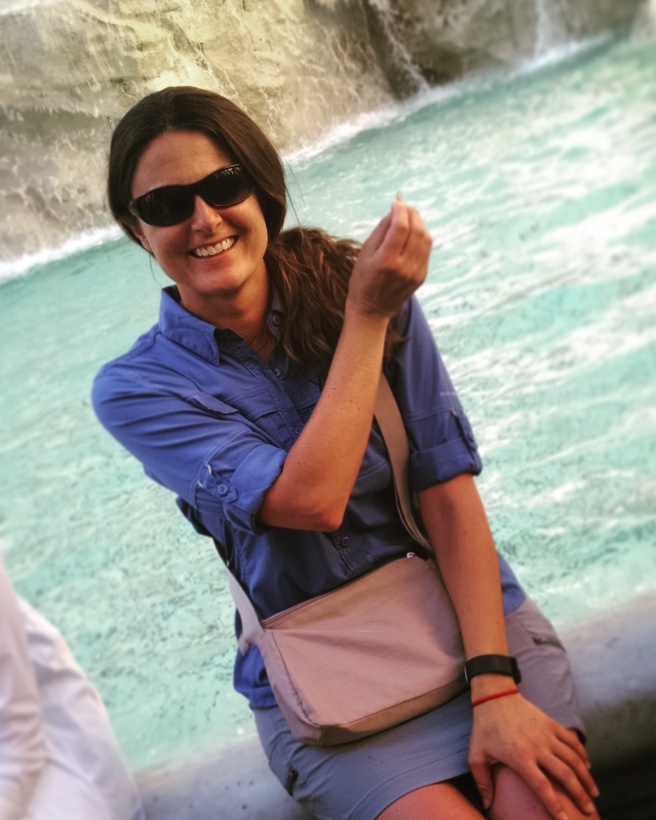 Throwing coin over my shoulder into Trevi Fountain. 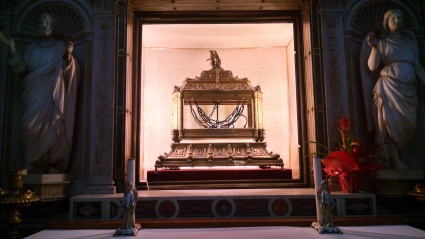 Said to be the chains that imprisoned St Peter in Rom. 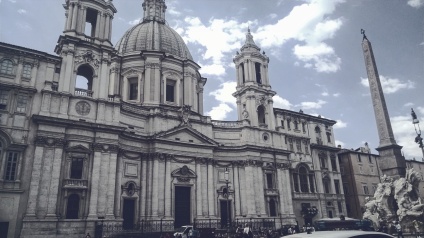 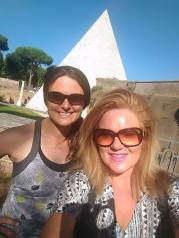 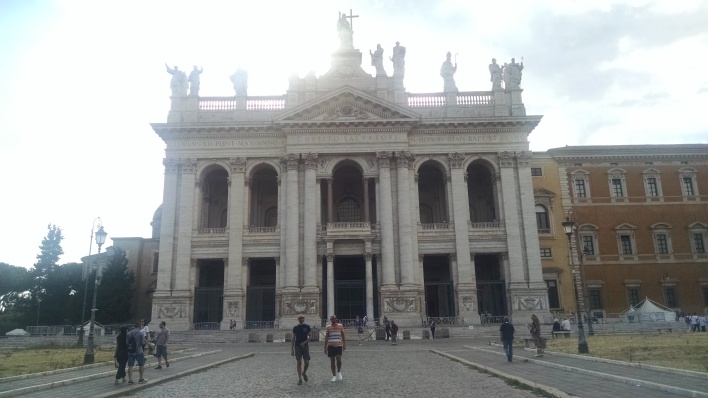 St Johns Cathedral – considered to be the Cathedral of Rome.

St Johns Cathedral was built by Constantine following his conversion to Christianity. Constantine statue at end of hall. 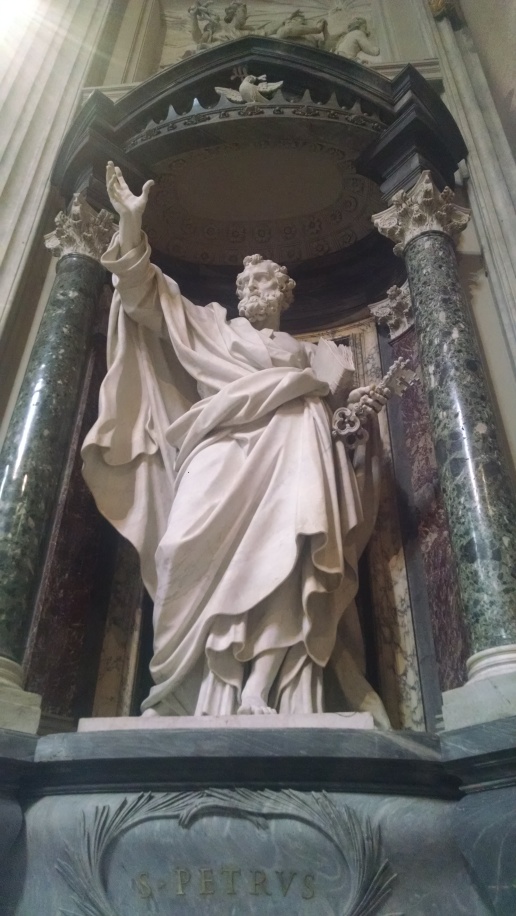 Beautiful sculptures line the interior of St Johns Cathedral. Sculpture of St Peter – see the keys in his hand? 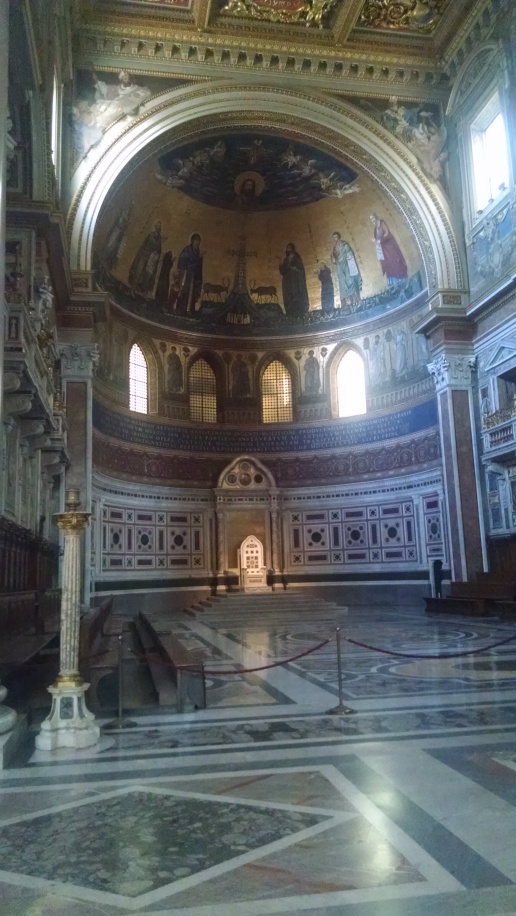 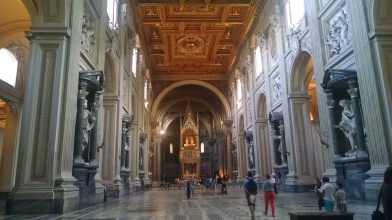 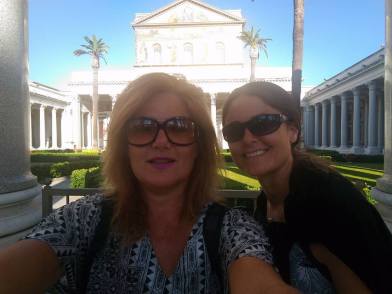 Me and Sandra visiting St Pauls Cathedral. Another one of the four big Cathedrals in Rome.

St Pauls Cathedral courtyard and outside. 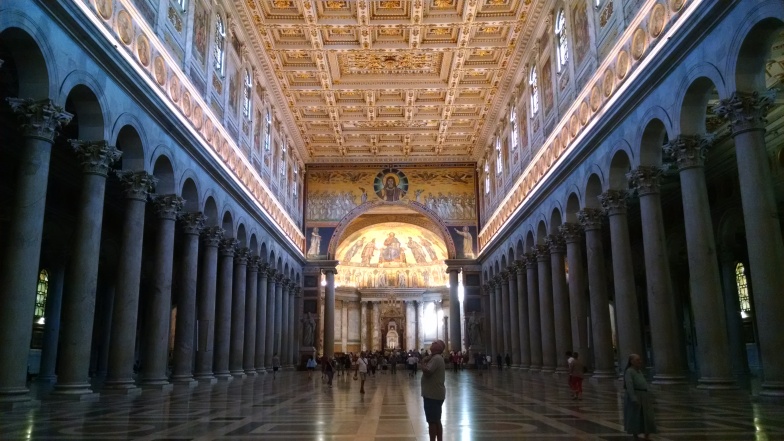 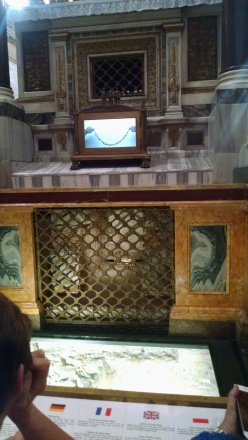 Behind the grate is the tomb of St Paul. Above is a piece of chain said to have been part of St Paul’s inprisonment in Rome.

Sandra also made sure I was introduced to the city’s best gelato, taste tested a variety of Tiramisu and invited me to join her family to experience the best “pinsa” (specialty pizza where the flour & grains have a unique 72 hour process before being used). She blessed me in a great number ways, most of all by her friendship and generosity. Thank you Sandra for your beautiful heart. 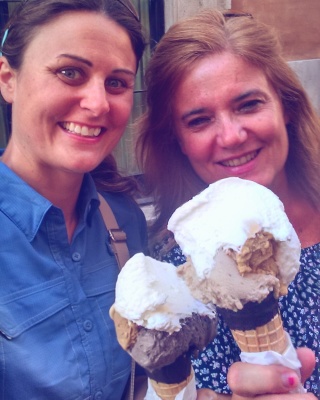 Gelato from Giolitti’s. One of the original gelateria’s in Rome. 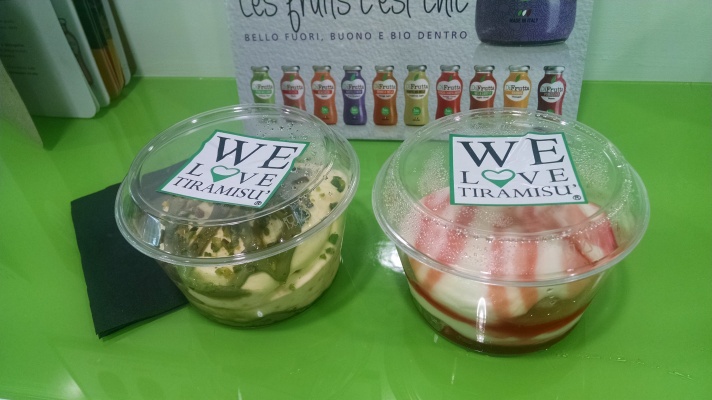 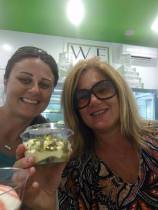 Me and Sandra about to enjoy Tiramisu. 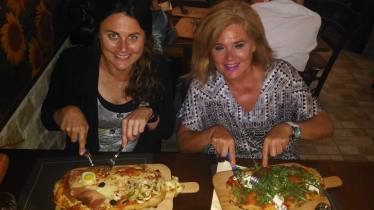 My first “pinsa” experience with Sandra and her family at DentroFuori.

Beer Tiramisu at DentroFuori. That’s right, they incorporate beer into the recipe.

All of us out for dinner at DentroFuori.

I did not make it to the Vatican on this trip. A few of you sent me messages to tell me that it was a highlight during your own visit and I know you may feel a bit of disappointment with me. Thank you for all the suggestions. Y’all are some well-traveled folks who love a wide variety of sights!  I was not able to fit every single one of them in. However, I did use my right hand to throw a coin over my left shoulder into Trevi Fountain. If the old superstition is true, then I shall return to Rome again…at which point, the Vatican will be on the top of my priority list.Thus proving again, that all roads still do lead to Rome. 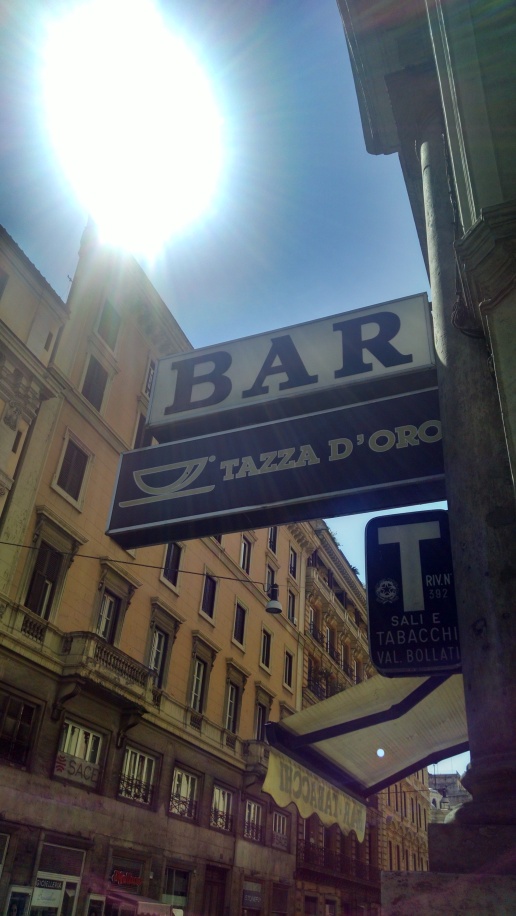 Thank you Nathan Sipes for recommending a visit to Tazza D’Oro coffee shop. The cappuccino was delicious! 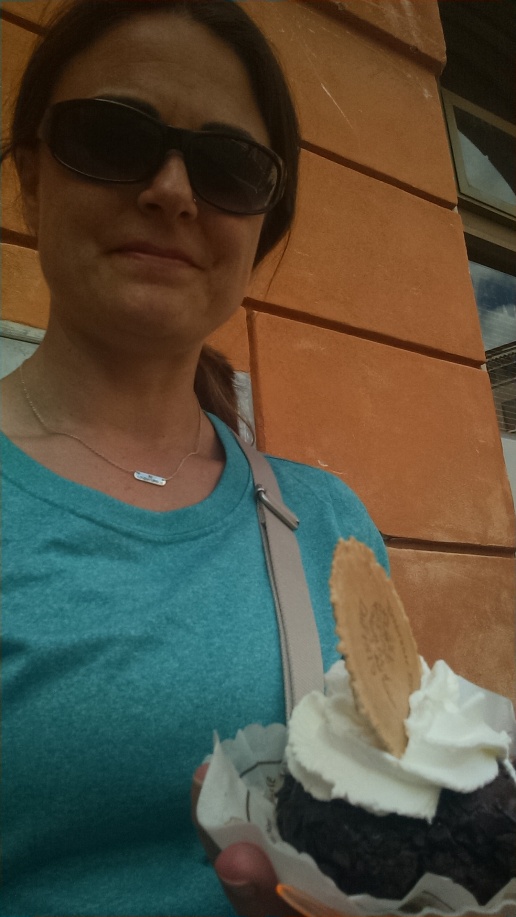 Thank you Roger Groenewold & Sandra for suggesting dark chocolate “tartufo” (or truffle) in Piazza Navona. It was so rich, I could only eat half!

5 thoughts on “All Roads Lead to Rome.”